This will all come to pass. Soon. Very soon. Be brave, you may only have one more night of this ahead of you. The entire Nepali diaspora is constantly thinking of you and your well being. We will overcome this tragedy.

Below is some analysis that attempts to put your tired minds at ease as your rest this rainy night.  I am writing this in response to speaking to my family, my wife's family, and extended family members and friends that are panicky because "NASA / BBC / America is forecasting a 8 to 10 Richter Scale quake will go off soon."

Since the major earthquake on 04.25.2015, a staggering 41 earthquakes have gone off in and around the Kathmandu Valley. However, only three have been greater than 6, and the lone 7.8 that precipitated this chaos. The intensity of the earthquakes are falling rapidly.

In this bleak moment, it is extremely important to understand that earthquake intensities are measured on a logarithmic scale. The Richter scale is misleading. A scale 8 quake is one thousand times more intense than a scale 5.  The majority of the aftershocks at 4-5 scales are actually a fraction of the intensity of the original one. To be precise, one thousand to ten thousand times less intense. The strongest aftershock of 6.7 was 30-50 times less intense than the original one. Things will improve, the law of math promises it.
Earthquake Intensities - Relative Measure


Lastly, a total of 22 earthquakes went off in the first 6 hours of the first one. However, that intensity is falling rapidly. In the next 12 hours, only 10 went off, and in the last 12, only 7. At this rate, mathematically, the aftershocks will fall to unnoticeable levels by tomorrow (Monday) afternoon. Hang in there. This will come to pass. Soon. Very soon.

Lastly, I can imagine your exhaustion with the aftershocks. The seismic event picture below complied from USGS, the only authoritative data repository, shows that every single earthquake in the last 2 days except the first 2 major events has gone off in the Bagmati Zone around Kathmandu valley. It must truly be exhausting.

Be bold, Stay strong. Squash rumours, and be Nepali. We've lost our Durbar Squares, but Pashupati and Swayambhu are still standing, tall, and proud, like each and every one of you. God bless you all, and to quote my childhood school - "Karod diyo ko gham banera desh ujyalo paarne chhau" 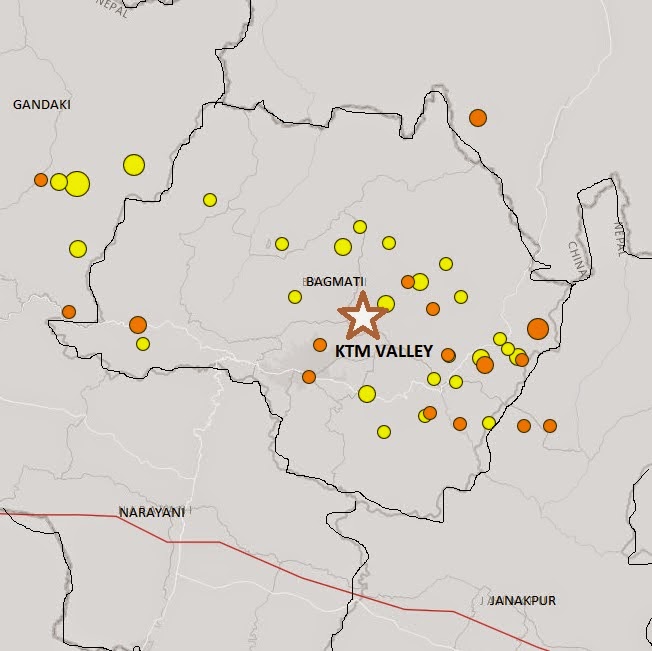