What are sensors and wearables?

Recent advances in telecommunications, microelectronics, sensor manufacturing and data analysis techniques have opened up new possibilities for using wearable technology in the digital health ecosystem to achieve a range of health outcomes.

In the past, the size of sensors and front-end electronics made it too difficult to use them in wearable tech to gather physiological and movement data.
Now, with miniature circuits, microcontroller functions, front-end amplification and wireless data transmission, wearable sensors can now be deployed in digital health monitoring systems.

Sensors and wearables can be integrated into various accessories such as garments, hats, wrist bands, socks, shoes, eyeglasses and other devices such as wristwatches, headphones and smartphones. Some sensors, mostly medical-grade ones, are used on a stand-alone basis.
Many wearable tech products use multiple digital health sensors that are typically integrated into sensor networks comprising other body-worn sensors and/or ambient sensors. Some monitoring systems require the gathered sensor and wearbles data to be uploaded to a remote site such as a hospital server for further clinical analysis.
With the advent of cloud-computing, many wearable sensor systems can now be easily upgraded without the need for user installation of software in their monitoring devices, which makes it easier and cheaper to maintain the health monitoring system networks.

How are sensors and wearables used in digital health?

As technology matures, and wearables and sensors are further miniaturized, more novel applications for healthcare will be developed.
We will increasingly witness integration of medical sensors into consumer electronics that will enable home-based medical data gathering and support remote care and preventive digital health programs.
Most of the present-day applications of sensors and wearables can be classified into the following five categories:

Safety Monitoring
Many sensors and wearables have been developed to detect falls, epileptic seizures and heart attacks in older people and susceptible individuals—and then send alarm signals to caregivers or emergency response teams.

Treatment Efficacy Assessment
Using sensors and wearables, the efficacy of treatments and outcomes of clinical trials can be better assessed. They help to track physiological changes from chronic conditions, as well as the progress of treatments on a continuous basis.
Sensors are also used to monitor, assess and improve patient compliance.

Early Detection of Disorders
By combining physiological sensors with activity monitors and consumer-end electronic devices, this application of digital health can be used for early detection of symptoms and adverse changes in a patient’s health status—facilitating timely medical interventions.

Current Market and Industry Trends in Sensors and Wearables
According to a report by the IHS, the global market for wearable tech will rise to 210 million unit shipments and $30 billion in revenue by 2018 from 96 million unit shipments and $8.5 billion in revenues during 2012. Note that this report includes infotainment, military and industrial markets, as well as health and fitness.
Another research firm, On World, predicts that in 2017, 515 million sensors for wearable, implantable or mobile health and fitness devices will be shipped globally—up from 107 million in 2012.
Between 2012 and 2017, wearable health and fitness device shipments will increase by 552% and make up over 80% of the mobile sensing health and fitness device market at this time.
The same firm also estimates that by 2017, 18.2 million health and wellness WSN systems—excluding sports/fitness devices-- will be shipped worldwide and annual revenues enabled by these systems will reach $16.3 billion. Cloud connected services will make up 53% of the revenues in five years. 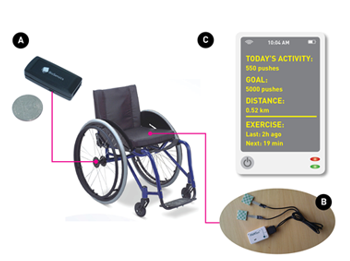 The technology consists of (A) a small wireless kinematic sensor on the rear wheel that monitors speed, distance and number of propulsions, (B) a low cost pressure sensor array for measuring pressure relief, and (C) an interactive display for auto biofeedback and reminders 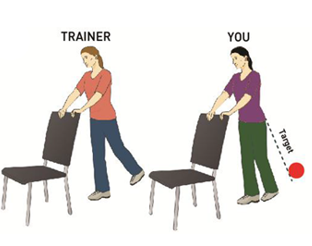 Virtually supervised web-based home exercise for older adults:
This collaborative project with the university of Arizona aims to improve mobility and reduce falls by enabling in home strength and balance training via an interactive web application that include an on-screen ‘user-avatar’ that mimics the users moments based on real time data from wearable sensors. 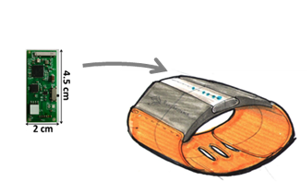 Allows You to Stay Better Engaged With Your Environment: For the most part, the usage of a smartphone or a tablet is a solitary activity, the screen forming a dividing wall between you and the outside world. Wearable tech largely eliminates that wall. Sure, glancing down at a watch’s face is similar to looking at a screen, but it’s much less involved. When it comes to devices like Google Glass the level of immersion possible is quite remarkable. Doing away with standard screens entirely, Glass and its ilk present an incredibly exciting and revolutionary way of engaging with personal technology. Indeed these pieces are generally just more convenient than smartphones or tablets. More Discreet: This is kind of a tricky topic, as the discreetness of devices like Google Glass could also lend the product to some less savory applications as well. However, for the most part the discreet nature of wearable tech is a positive thing. For example, remember that bracelet I mentioned earlier, the one which can alert you to the existence of any and all Facebook messages? Well, it can actually alert you to quite a bit more, including phone calls the user has received. Previously, to learn that same information the student would have had to pull out their phone or their computer, potentially disrupting the class (or, at the least, their own learning) and earning the scorn of their teacher. Now a student can learn essentially the same information in a much quieter, far less obtrusive manner. This is one example of the discreet nature of wearable tech benefiting not only the user, but their environment as well.

Potentially More Fashionable: One of the most interesting ways that portable technology has progressed is in the area of aesthetics. Interestingly enough, many buyers seem to care just as much, if not more in some cases, about a device’s sleek look as they do its performance or capabilities. Tech companies have become set upon making their devices smaller, sleeker, lighter and more intuitive. As such, tech like pads and pods and, of course, phones have almost become fashion accessories to some. However, because they are replacing items like standard glasses and jewelry wearable tech has an even more centralized focus on being fashionable. If these items don’t look as good as possible their appeal will be greatly limited. After all, who would want to wear an ugly bracelet or a pair of glasses that did not compliment their face? Some won’t care much for the look of the pieces, buying them solely for their technological capabilities, but for others aesthetics will be very important, and the companies who make these products will need to recognize that.

Less Versatile: Clearly, wearable tech can do plenty that standard smartphones and tablets can’t do, but they also have some pretty serious limitations. For example, you’re not going to want to write an email on a watch, and while your bracelet may light up to let you know when you’ve received a message it’s not going to allow you to see it or respond to it. Most pieces of wearable tech aren’t going to come with keyboards because there’s simply nowhere to put them. You’re also probably not going to use a watch or a pair of glasses to make a phone call. Whereas iPad and Androids are machines of many facets, most wearable tech is built around one very specific purpose. What that purpose is changes from machine to machine, but one constant remains: these devices simply aren’t as versatile as smartphones in some areas.

Smaller: Here’s one of the most obvious complaints one might have about wearable tech. It’s also a complaint which doesn’t apply at all to Google Glass, or to that bracelet I mentioned earlier. However, the fact remains that you’re generally not going to want to wear a piece of jewelry which is as big as an iPad or even a smartphone. That means that, generally speaking, wearable tech will be smaller than your average phone or tablet. That might make certain tasks harder to accomplish, like browsing the internet for example.

Not as Widely Accepted: This is the kind of thing that will change in time as people get used to its presence, but for the foreseeable future people who utilize wearable tech are going to be seen as outcasts. This prejudice has already reared its ugly head, as evidenced by the story of Steve Mann, an inventor who was attacked in a Paris McDonalds by three men who were fearful of the EyeTap Digital Eye Glass he was wearing. Currently, wearable tech is not widely understood or accepted by the masses, and it won’t be until it becomes more widespread. So for now, if you want to use Google Glass in place of a smartphone don’t be surprised when you get some weird looks.

Regardless of these pros and cons, wearable tech is obviously a hugely exciting concept. Far from being so far-off pipe dream, there are many products being produced right now which could easily be placed under that banner head. Some have even already been released, though in limited numbers for the most part. While wearable tech won’t be replacing smartphones any time soon, and likely won’t be widely used for years to come, the future is bright for this fledgling industry. There was a time when cell phones were rare and their usage seemed strange and disagreeable to some. That time has obviously passed us by. Wearable tech will go through the same process. At first, it’ll seem strange and perhaps a little scary, but as time continues on these products will almost certainly become hugely popular. They have too much potential to be ignored. So keep an eye on wearable tech. It’s here to make our lives easier, to grant us new opportunities and, maybe, to change the way we interact with the world as a whole, and with each other.